by Andrew Consiglio - Leader and Director of Youth Fellowship 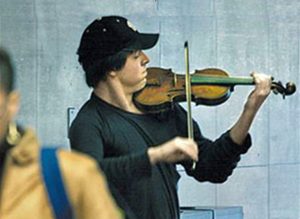 A man sat in the underground station of Washington DC one cold January morning and started to play the violin – he played 6 Bach pieces for about 45 minutes. Since it was rush hour, thousands of people rushed through the station on their way to work. In all only 6 people stopped for a few minutes to listen and he only collected 32 dollars. When he finished, no one applauded him. 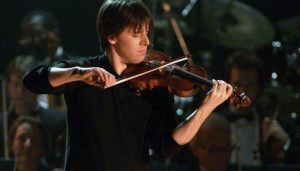 This violinist was Joshua Bell, one of the most famous musicians in the world who had even played one of the most intricate pieces on a violin worth 3.5 million dollars. Two days before he played in the underground the had given a performance in a Boston Theatre. The seats were 100 dollars each and it was completely sold out. But incognito, the 1000s in the underground failed to recognise who he was or appreciate his music. They were too busy, and reckoned he was one of the usual buskers.

Jesus Christ is the face of the Father’s mercy.

Lent can come and the same thing may happen to us. We are too busy to listen. Even worse, we think we know it all, have heard it all before, and fail to recognise just who is calling us: no one less that Jesus the Son of God!

Of him, Pope Francis said in the Bull of Indiction of the Year of Mercy, our theme for this series: Jesus Christ is the face of the Father’s mercy.

Mercy – in Hebrew “hesed” – is what God is rich in (Eph 2:4). This Hebrew word is hard to translate because it is so rich in meaning: loving kindness, faithful love and mercy. Together with “rachamim”, it shows the tender compassion of God who is on our side, who is goodness itself.

The Three Aspects of Our Humanity

In those times leprosy was considered to be a symbol of sin because slowly but surely it eats you up and destroys you. Lepers were considered unclean, impure and could not go up to the Temple to worship God because the Torah prohibited all contact with any leper.

The person with such an infectious disease must wear torn clothes, let his hair be unkempt, cover the lower part of his face and cry out, ‘Unclean! Unclean!’ …and he is to live alone outside the camp
Lev. 13:45

The leper was cut off from society, and his family. He was a social outcast and nobody could live with him or touch him.

Dr Paul Brand, an authority on the subject found that the bacteria which causes Hansen’s disease causes numbness to the nerves in hands and so causes the loss of the sensation of pain. So when rats gnawed at their fingers they wouldn’t notice.

How do we apply this passage to ourselves at the beginning of Lent?

This man had guts to do what he did. He wasn’t allowed to approach anyone but he goes and falls at Jesus’ feet with boldness and humility. He knows he cannot heal himself.

Let us too go to Jesus for mercy and healing in prayer and the sacrament of reconciliation. Whatever our sin is, whatever our evil, He will not push us away:

Whoever comes to me I will never drive away.
John 6:37

Jesus, filled with compassion, touches the leper. He could have healed him with a word like many other healings. The physical contact would have been a scandal because when you touched someone unclean you became unclean yourself. Not so with Jesus. The unclean doesn’t effect him but He effects it. Jesus is not effected by evil but evil is effected by him.

This man was healed physically. We should ask the Lord for healing in our bodies too.

And these signs will accompany those who believe: In my name they will drive out demons; they will speak in new tongues; they will pick up snakes with their hands; and when they drink deadly poison, it will not hurt them at all; they will place their hands on sick people, and they will get well.  Mark 16:7-8

All this points to the cross. Why?

This man is reintegrated into society and is no longer an outcast: As a result, Jesus could no longer enter a town openly but stayed outside in lonely places. They exchanged places. This is a foreshadow of the cross.

To show himself to a priest was followed by offering the sacrifice prescribed in the law of Moses for the cleansing of skin disease. The prescribed rite was to take two birds, one to be sacrificed and the other, dipped in the blood of the first, to fly away free (Lev 14:3-7). Before his eyes there would be a vivid symbolic image of what Jesus had just done for him. One is sacrificed; another is set free. Although he could not have understood it then, this man had been set free from leprosy at the cost of Christ’s own blood, son to be shed on the cross.

Faith is to believe what we do not see; and the reward of this faith is to see what we believe.- Saint Augustine